This is part of the “Compiling Black with mypyc” series.

Having compiled Black successfully without it blowing up, it was time to try to optimize Black for mypyc. While mypyc is designed to handle all sorts of statically typed code, changing up the code even a little bit can allow mypyc to perform additional optimizations, ultimately helping performance a bunch.

And while I did go into this hoping I could spot some potential architectural or data structure optimizations, I wasn’t able to so the optimizations shared will be mypyc specific.

First off, profiling! It’s hard to optimize code well if you don’t know where time is being spent.

To start off, I profiled Black over some of its own source code with cProfile to get a birds eye view:

With the help of gprof2dot (well, actually the yelp-gprof2dot fork), I converted the profiling data into a nice SVG graph which I could then open in my web browser.

Tip: please open this massive SVG in a new tab because viewing it here will probably be painful :)

I tried using Scalene as I’ve heard good things about it, but it didn’t work sadly. It wasn’t that bad as I still had py-spy, line_profiler, and good ol' cProfile. py-spy in particular was invaluable since it can profile (well err sample) C extensions which cProfile cannot. line_profiler was used exclusively for micro-optimizations :p

Anyway, I repeated this process quite a few times, making sure to try different files to get a general feel where time is going regardless of the input. Here are the main takeaways:

I was quite surprised how much time blib2to3 related functions were eating up. Just look how concentrated the hotspots really are!

These hotspots make this part of the codebase way easier to optimize, so I optimized blib2to3 first.

It’s been so long since I first looked into this, so I don’t remember what optimizations I tried initially, but I do remember them having no effect :(

I tried other things and they actually helped 🎉 … probably since I took into account how mypyc works. Ultimately, many different optimizations were done over three rounds.

This meant reading through the code’s control flow, checking whether certain states are impossible. Blib2to3 is a legacy codebase, so type annotations were added to unblock other work. The goal was to make blib2to3 type check, and not write perfectly typed code. So naturally, there were a few permissive (parameter) type annotations I could make stricter:

Since mypyc injects runtime type checks, simplifying Optional[Text] to Text reduces function call overhead. value only needs to pass (in equivalent C code) isinstance(value, str). This also has the neat side-effect of allowing me to remove some asserts.

Tightening up type annotations involving typing.Any can be particularly worthwhile as it forces the use of generic C code that can handle any kind of object. I could only make this change once, but it’s better than nothing.

Avoiding calculating the same value over and over again is one of the most common optimizations out there, and it’s for good reason, it’s usually easy to fix. BUT, with mypyc we can take this further by using typing.Final. Final variables can often be injected at lookup sites at compile time, skipping the lookups at runtime!

Let me show an example, let’s take this code and see what adding a single Final does.

Compiling it with mypyc, the C code for the calculate_y function is .. well .. quite long! Notice how much work has to be done to safely look up the global value at runtime.

If we mark the SCALE variable as Final, mypyc will notice that and inline the value.

Just look at how much shorter this is!

If the value can’t be inlined, say because it involves a function call then mypyc will just replace the globals dictionary lookup and instead use a C static (which is still faster).

Applying this optimization to Black yields changes like the following to black.comments and black.parsing1 respectively:

In total, this was the most common optimization I applied throughout this whole project. It’s simple but effective!

Time for another example:

The function used to process the items isn’t known until call time, forcing mypyc to fall back to the standard Python calling convention (albeit it does use the faster vectorcall convention available for C functions). If I instead hardcode tag in process_items, mypyc can call the C function directly which involves way less work.

Most of the time this isn’t possible because if your function calls are dynamic, it’s probably because the code depends on it … but keep it in mind.

By sheer luck, I was able to replace two dynamic function calls with static calls in blib2to3.pgen2.parse.Parser, the very hot parser code!

Also since blib2to3.pytree.convert is guaranteed to return a non-None value, I could drop a branch which was neat :)

If you’ve worked with me before you’ll know that I love to write developer tooling to make life easier. (Un)fortunately this project needed two bits of tooling that simply didn’t exist at the time:

The first one is pretty self-explanatory, I needed a good benchmark suite to make sure this project would actually improve performance, and to also quantify the gains (important when weighing optimizations).

The second one is less clear, I effectively wanted mypy-primer, but for Black: 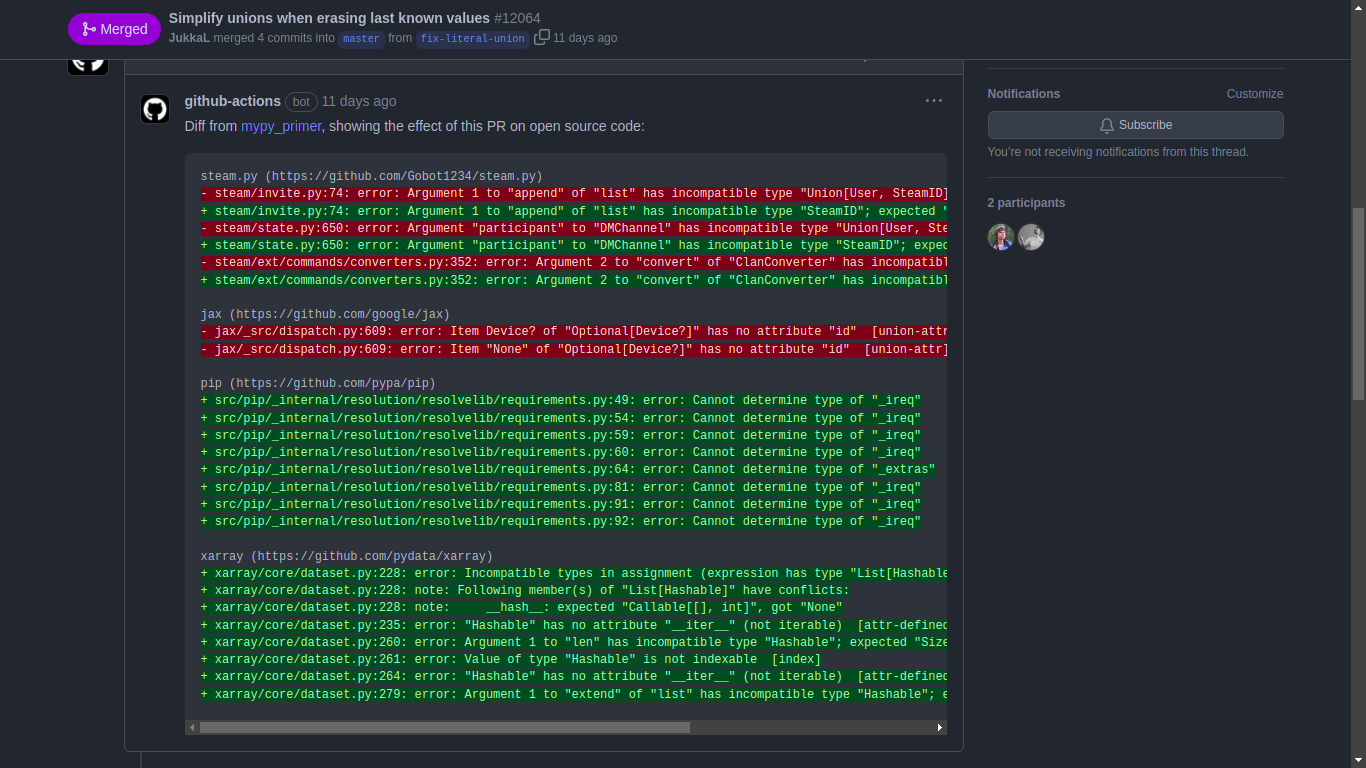 So I got to work creating blackbench and (the original) diff-shades. In hindsight, blackbench sucks and needs a rewrite so I don’t want to go into too much detail about it, but the summary is that it came with benchmarks for the following tasks:

across quite a few inputs. The story is similar for the original diff-shades, it worked and made it possible to verify mypyc didn’t change formatting, but its code was horrible (and not to mention unmaintainable). It was bad enough that I rewrote the tool later on.

The TL;DR version of what diff-shades does is that it clones a bunch of projects, runs Black on ‘em while recording the results. Then you use its other commands to analyze and compare recordings.

At this point I had found a workaround to the GCC array subscript 1 is above array bounds error and was curious to whether using GCC would produce faster binaries. The answer turned out to be very much no.

Anyway, other than getting distracted by diff-shades, I looked into the gcc issue to find a potential workaround. I found one, but it was useless 🙂 Collecting numbers for both gcc-10 and clang showed that gcc fails in basically all departments:

I’m honestly happy that GCC failed to compile on that parser setup code, clang (for Linux) is so much better.

Quick note
I also did some micro-optimizations like reordering if checks to hit the common case first or replacing x = x + 1 with x += 1, but to this day I don’t know whether they actually had an impact.

Additionally, I haven’t discussed the last optimization round I did for src/black, but there’s nothing in that which I haven’t covered yet.

Anyhow, these optimizations bumped the parsing speedup over interpreted from ~1.73x to ~1.9x. You can see the changes made here and also here.

For more detail, see the tables at the bottom for the compiled-mypyc-preopt and compiled-mypyc columns in this report I compiled. It took a long time to compile this report by the way, setting up a properly configured benchmark setup and gathering multiple data samples is very time consuming!

In the end, I managed to increase compiled performance by an additional 10-15% which is pretty nice! I was aiming for 25%, but in hindsight I might have been hoping for too much 🙂. Also yes, they were virtually useless when interpreted.